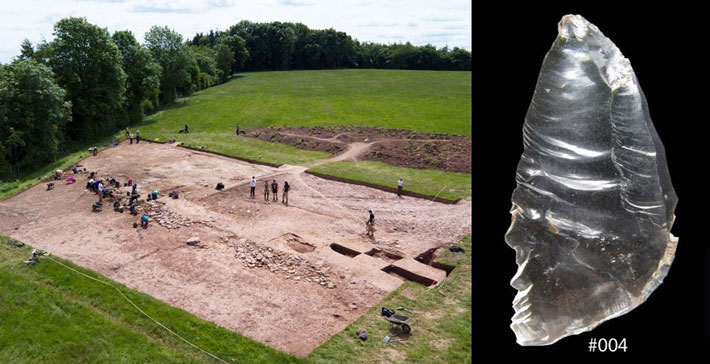 MANCHESTER, ENGLAND—According to a statement released by the University of Manchester, transparent rock crystals have been recovered from Neolithic burial mounds at Dorstone Hill in England’s West Midlands. Researchers including Nick Overton of the University of Manchester and his colleagues from the University of Cardiff and Herefordshire County Council found that the rock crystal had been knapped in the same manner as flint recovered from the site, but it had not been used as tools, such as arrowheads or scrapers. Rather, the worked rock crystal was deposited in the mounds over a period of about 300 years, along with pottery, stone tools, and cremated bone. Such large pieces of rare rock crystal were likely imported from Snowdonia in north Wales or St. David’s Head in southwestern Wales. Overton explained. The team members plan to analyze the chemical composition of the crystals in order to track down their source. Read the original scholarly article about this research in Cambridge Archaeological Journal. To read about a rock crystal jar that was discovered as part of a large cache of artifacts, go to "Secrets of Scotland's Viking Age Hoard."