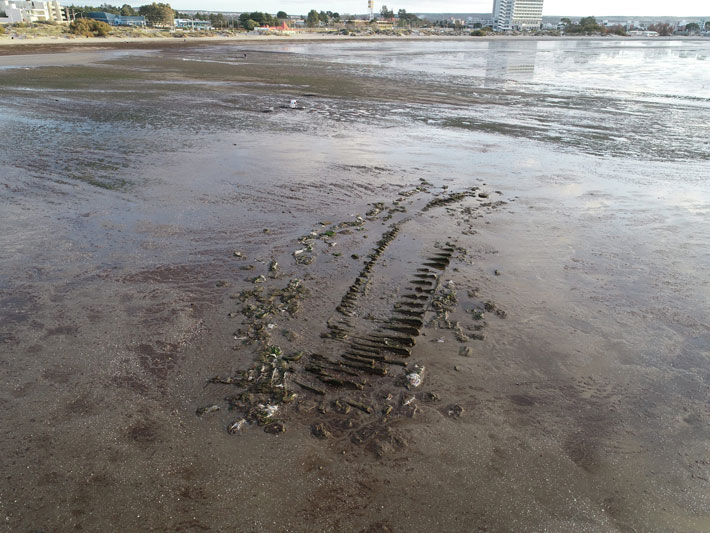 NEW YORK, NEW YORK—According to a statement released by Columbia University, a shipwreck found off the coast of southern Argentina could be the Dolphin, a whaling ship from Rhode Island that was lost in 1859. Historic records indicate that the fast, square-rigged ship measured 111 feet long, weighed 325 tons, and was completed in October of 1850. The ship’s last voyage began in 1858, when the Dolphin left Warren, Rhode Island, and ended, according to a letter written by her captain, when she was destroyed on the rocks in “New Bay,” which may refer to Golfo Nuevo, a natural harbor in Patagonia. Ignacio Mundo of Argentina’s Laboratory of Dendrochronology and Environmental History and Mukund Rao of the Lamont-Doherty Earth Observatory at Columbia University compared tree rings from the wreckage with a database of North American trees, and identified its timbers as oak felled in New England in 1849 and pine grown in the southeastern United States. Artifacts recovered near the wreck, including brass nails, a leather shoe, iron cauldrons, and bricks, also support the identification of a whaler, the researchers explained. To read about the discovery of two famous shipwrecks, go to "The Wrecks of Erebus and Terror," one of ARCHAEOLOGY's Top 10 Discoveries of the Decade.