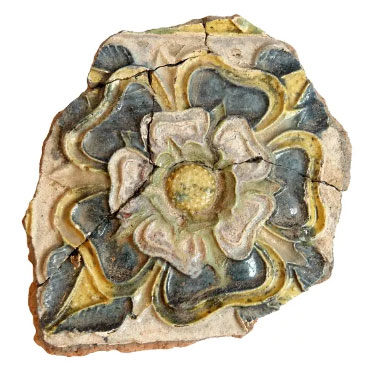 KRAKÓW, POLAND—Science in Poland reports that excavations at the site of a sixteenth-century wooden castle in a wetland in east-central Poland have uncovered the clay base of a masonry stove and tiles decorated in green, yellow, white, and blue enamel. “Among [Zelechów castle’s] remains we found numerous, beautifully decorated tiles with rich geometric, plant, and animal patterns,” said Wojciech Bis of the Polish Academy of Sciences. “There were also images of fantastic animals, including griffins, human figures, and coast of arms.” The stove would have provided radiant heat for the members of the court. The team members found the tiles among burnt beams and layers of burnt clay, suggesting that the castle was destroyed by fire. The clay may have covered the walls and floors of the structure, Bis explained. Similar tiles have been found in Wawel Royal Castle in Kraków, suggesting that this castle was used by the same elites. Evidence of feasting, in the form of pig and oxen bones and fragments of ceramic vessels, was also uncovered. To read about burials of four medieval knights that were uncovered in Poland, go to "Viking Knights, Polish Days."