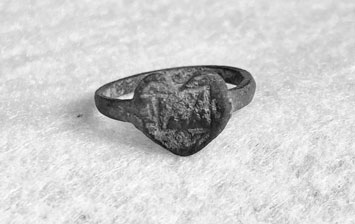 NILES, MICHIGAN—The Charlotte Observer reports that a heart-shaped ring has been unearthed in southwest Michigan at the site of Fort St. Joseph, a stronghold built by the French in the 1680s as a mission, garrison, and trading post. Erika Hartley of the Fort St. Joseph Archaeological Project said the ring, known as a “Jesuit ring,” was likely manufactured somewhere else for trading purposes, and could have been lost at any time during the century that the fort was occupied. Kylie Krueger of Western Michigan University explained that these types of rings were typically made of copper alloy with bezels in different shapes. Some of them even had glass insets made to look like precious stones, she added. To read about a late medieval ring unearthed in Wales, go to "Artifact."