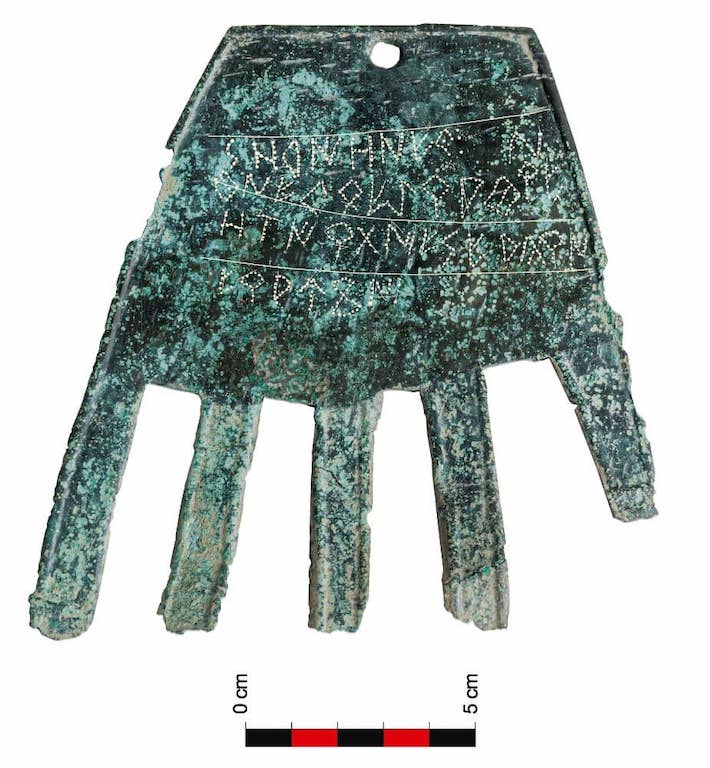 BARCELONA, SPAIN—The Guardian reports that engravings on the so-called Hand of Irulegi, a flat, 2,000-year-old hand-shaped bronze artifact unearthed last year in northern Spain, may be an example of the written language of the Vascones, which is thought to be an ancestor of modern-day Basque. The artifact was found in an abandoned mudbrick dwelling thought to have been burned down in the first century B.C. during the Sertorian War, fought by two Roman factions on the Iberian Peninsula. Only a few words written on Vascone coins had previously been known to scholars, and so it was thought that the Vascones began writing only after the Romans came to the region and introduced the Latin alphabet. Javier Velaza of the University of Barcelona said that the 40 characters on the Hand of Irulegi could represent five words. One of them has been identified as sorioneku, an ancestor of the modern Basque word zorioneko, for good luck, or good omen. “We were almost convinced that the ancient Vascones were illiterate and didn’t use writing except when it came to minting coins,” commented team member Joaquín Gorrochategui of the University of the Basque County. To read about a Visigothic city built in Spain following the Roman Empire's final collapse, go to "The Visigoths' Imperial Ambitions."