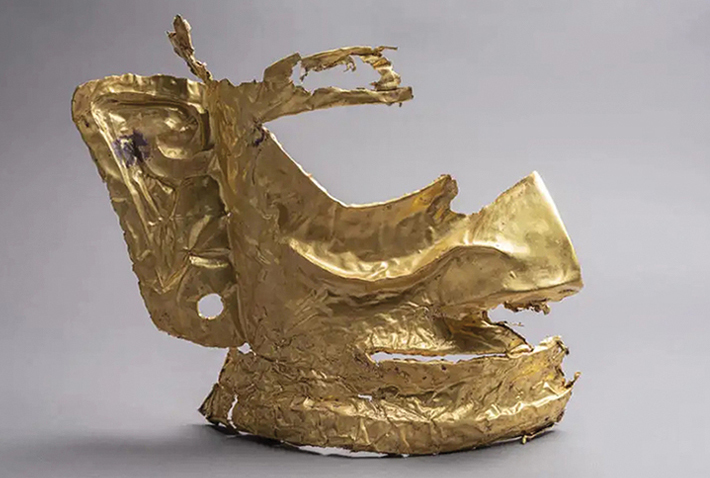 CHENGDU, CHINA—ArtNews reports that a range of new artifacts has been discovered at the Bronze Age Sanxingdui site in southwest China. The site, which is close to the city of Chengdu in the Sichuan Basin, has been under constant excavation since 1986, when two pits filled with hundreds of jade, bronze, and ivory objects that had been ritually disposed of were discovered. Researchers have now uncovered six additional pits where people ritually sacrificed their valuables. Four of these pits date to around 1200 to 1000 B.C. and had ivory objects at the top and finely crafted bronze vessels and figurines at the bottom. One of the bronze figurines is in a kneeling position and carries on its head a ritual vessel called a Zun decorated with a dragon. The other two pits date to around 1046 to 950 B.C. One of these later pits held ivory items and small gold foil ornaments in the shape of stripes, circles, and birds—as well as a gold mask weighing more than half a pound. The final pit contained a wooden chest with traces of cinnabar pigment suggesting it had been painted red. Read the original scholarly article about this research in Antiquity. To read about a theory regarding what led to the end of the Sanxingdui civilization, go to “Seismic Shift.”