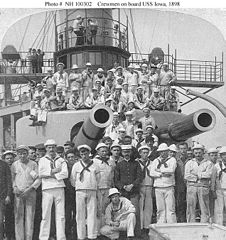 WASHINGTON, D.C.—As part of her internship with the Naval History and Heritage Command’s Underwater Archaeology Branch, Mikala Pyrch of George Washington University helped to identify the rare nineteenth-century Howell torpedo discovered earlier this year by Navy dolphins training off the coast of San Diego. (The Howell torpedo was the first propelled torpedo and only three are known to have survived.) Of the eight ships that had been carrying Howell torpedoes, two of them had traveled the California coast. “That narrowed it down to the USS Marblehead and the USS Iowa. We went to the National Archives and looked in the deck logs. I saw that in December of 1899 Iowa had been doing target practice with the torpedoes and had lost… Howell No. 24,” she said. The surviving mid- and tail-sections of the torpedo are being conserved at the Washington Navy Yard.