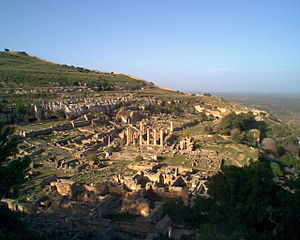 CYRENAICA, LIBYA—Archaeologist and blogger Areej Khattab reports that people living near the UNESCO World Heritage Site of Cyrene have destroyed part of its necropolis. Using earth movers, the farmers allegedly cleared the land, which traditionally belongs to them, and then threw the artifacts into a nearby river. Khattab adds that the land will be sold to developers for homes and shops. “I have been trying everything to stop this disaster. I appealed, in vain, to the archaeological authorities as well as the local authorities. I contacted one of the brigades in charge of the city’s security, who informed me that they could intervene only if the authorities made an official request, but they haven’t made the slightest move to get involved… I even called the Culture Minister on his mobile phone. I left a message but I haven’t heard anything yet,” she writes.