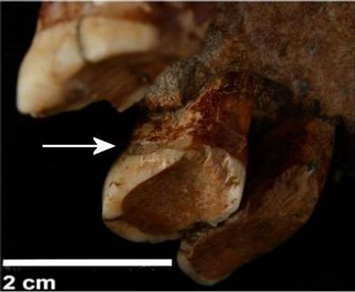 VALENCIA, SPAIN—Scientists analyzing Neanderthal remains found in Spain's Cova Foradà believe they have found evidence that modern human's closest extinct relative once used toothpicks to clear food from between their chompers, as well as to relieve the pain from periodontal disease. Neanderthal teeth found in the Spanish cave could date as far back as 150,000 years ago showed a lot of wear consistent with tooth decay that would have caused sore gums but no cavities. The research team speculates that something akin to a stiff blade of grass might have been used as a toothpick by the ancient hominins.