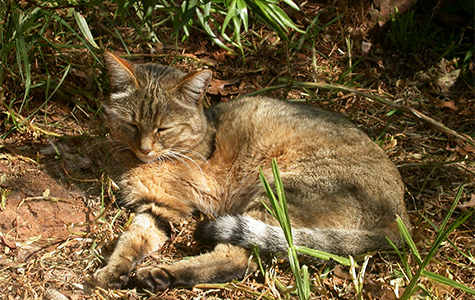 ST. LOUIS, MISSOURI—Study of a farming village in the Shaanxi province of China has turned up some of the earliest known evidence of cat domestication. Eight bones from two cats were found at the site, along with remains of dogs, pigs, deer, and rodent. Radiocarbon dating indicates the material at the site dates to roughly 5,300 years ago. Isotopic analysis of the cat bones suggested that they were eating rats that had eaten millet that was grown on the farm. Interestingly, one of the two cats seemed to eat more millet than smaller animals, indicating that the ancient Chinese farmers were feeding it. "Results of this study show that the village of Quanhucun was a source of food for the cats 5,300 years ago, and the relationship between humans and cats was commensal, or advantageous for the cats," said Fiona Marshall, an archaeologist at Washington University in St. Louis. "Even if these cats were not yet domesticated, our evidence confirms that they lived in close proximity to farmers, and that the relationship had mutual benefits."