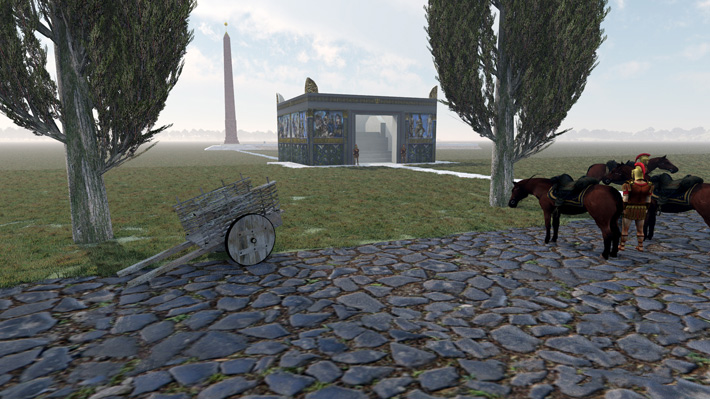 BLOOMINGTON, INDIANA—Two monuments found off the Via Flaminia, once the major road leading from Rome to the Apennine Mountains, were believed to be strategically built to celebrate the birthday of Emperor Augustus on September 23. Using GPS coordinates and the exact measurements of all the buildings and the surrounding area, a team of researchers at Indiana University (IU) put this legend to the test. Supposedly, on the founder of the Roman Empire's birthday, the 71-foot-tall Obelisk of Montecitorio would act as the pointer of a giant sundial on the plaza below and its shadow would neatly bisect the Ara Pacis, or Altar of Peace, built in 9 B.C. The team used NASA's Horizon System to figure out what the position of the sun would have been more than 2000 years ago and determined that it would have peered directly over the obelisk on October 9. That date corresponds with the annual festival of the Temple Palatine Apollo. "Inscriptions on the obelisk show that Augustus explicitly dedicated the obelisk to his favorite deity, Apollo, the Sun god,” said Bernie Frischer, an archaeo-informaticist at IU. “And the most lavish new temple Augustus built, the Temple of Palatine Apollo, was dedicated to his patron god and built right next to Augustus’ own home."