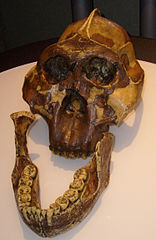 OXFORD, ENGLAND—According to a review of baboon diets by Gabriele Macho of Oxford University, Paranthropus boisei, a hominid who lived in East Africa between 2.4 million and 1.4 million years ago, probably survived on a diet of grass bulbs, or tiger nuts, supplemented with fruits and invertebrates such as worms and grasshoppers. Paranthropus boisei is nicknamed “Nutcracker Man” for its powerful jaws, but its teeth are better suited for eating soft foods, and show signs of abrasion. In addition, stable isotope analysis indicated that the hominids ate grasses and sedges. Macho suggests that the marks on the teeth of Paranthropus boisei and modern baboons could have been caused by highly abrasive, starchy tiger nuts that require a lot of chewing to digest. “I believe that the theory—that “Nutcracker Man” lived on large amounts of tiger nuts—helps settle the debate about what our early human ancestor ate. …What this research tells us is that hominins were selective about the part of the grass that they ate, choosing the grass bulbs at the base of the grass blade as the mainstay of their diet,” she explained.