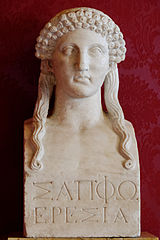 OXFORD, ENGLAND—A second or third-century A.D. papyrus held in private hands has yielded two previously unknown poems written by the seventh-century B.C. Greek poetess Sappho. The first poem speaks of a sea voyage undertaken by a Charaxos, and a Larichos. The two have been thought to be Sapphos’ brothers since antiquity. Only a few words of the second poem, dedicated to the goddess Aphrodite, survive. Both poems fit into the first of Sappho’s nine books of poetry. “All the poems of Sappho’s first book seem to have been about family, biography, and cult, together with poems about love/Aphrodite,” said papyrologist Dirk Obbink of Oxford University. He thinks the papyrus came from the Egyptian city of Oxyrhynchus, where many ancient papyri have been discovered.