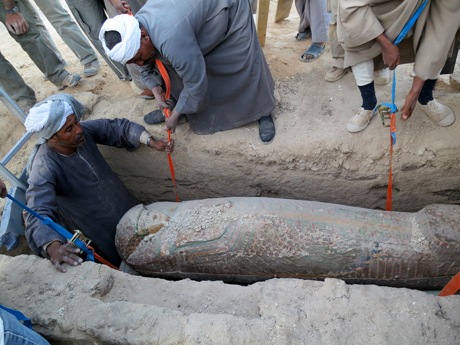 CAIRO, EGYPT—Egypt’s antiquities minister Mohamed Ibrahim announced that a joint Spanish-Egyptian team of archaeologists discovered a wooden sarcophagus dating to 1600 B.C. in Luxor, at the Dra Abul-Naga necropolis. Dubbed the “Feathers Sarcophagus,” the lid of the human-shaped coffin is painted with bird feathers and the titles of the deceased, whose well-preserved mummy is thought to have been a high-ranking official. The shaft of the tomb had been blocked with limestone, protecting its contents from looters in antiquity. José Galan, head of the Spanish team, told Ahram Online that the excavation remains in full swing.