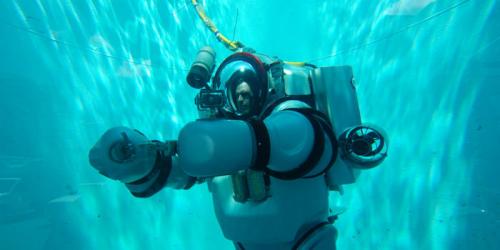 WOODS HOLE, MASSACHUSETTS—A suit designed to be worn in New York City’s water treatment plants will be used to explore the Antikythera shipwreck in the deep waters of the Aegean Sea later this year. “It’s basically a wearable submarine. The pressure inside is no different from being in a submarine or in fresh air. We can go straight to the bottom, spend five hours there, and come straight back to the surface with no decompression,” diving specialist Phil Short told New Scientist. Known as the Exosuit, it has voice, video, and data links; articulated joints for free movement; an umbilical cable to supply it with power for its thrusters; and a rebreather that can provide 50 hours of life support. The Antikythera device, dubbed the world’s oldest computer, was pulled from the Roman wreck by Greek sponge divers in 1900. “All we can do is get down there, get close to the sediment, and map out the debris field with our metal detectors. Over a period of meticulous seasons, we’ll slowly close in on what we hope is another mechanism,” said Brendan Foley, co-director of field operations at Woods Hole Oceanographic Institution’s Deep Submergence Laboratory.