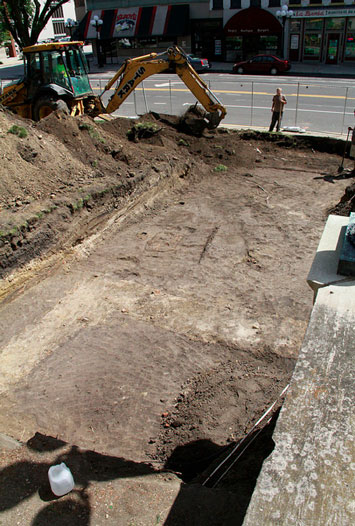 BLOOMINGTON, ILLINOIS—Excavations at the McLean County Museum of History have uncovered part of the footprint of the 1836 courthouse where Abraham Lincoln often worked as an attorney. “They found the corner and now can plot out the exact location. These are the physical remains of an incredibly historical episode in McLean County,” museum director Greg Koos told The Pantagraph. The two-story brick structure replaced a wood-frame building, until it was eventually torn down and replaced in 1868. Archaeologists Christopher Stratton and Floyd Mansberger of Fever River Research also found a line of fence posts, and they recovered pieces of glass, a pipe stem, ceramic pieces, spikes, and nails. The researchers will dig in the four corners of the property, including the site of two early jails.