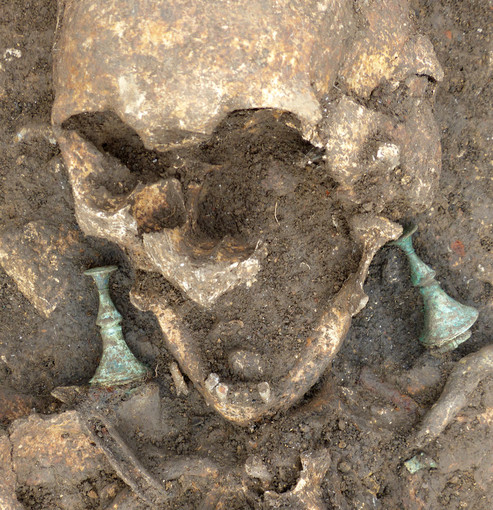 SAINT-AUBIN-DES-CHAMPS, FRANCE—Researchers from France's public archaeology agency INRAP are excavating an early medieval necropolis in Normandy. Dating from the fifth to the seventh centuries A.D., the village cemetery held more than 300 burials and was not included in any surviving records from the time, an era when the Frankish Merovingian dynasty ruled the region. According to an INRAP press release, the team is particularly interested in how the site shows how ordinary people experienced the transition from the pagan beliefs of the Roman Empire to the rise of Christianity. Earlier burials in the cemetery feature skeletons buried with lavish grave goods, such as a woman found wearing pins in the shape of bronze trumpets, and a man buried with twenty objects, including an ax, spear, dagger, and a silver coin placed in his mouth. Later burials do not seem to include as many artifacts, reflecting the growing influence of Christianity, which did not encourage the villagers to take objects with them into the afterlife.