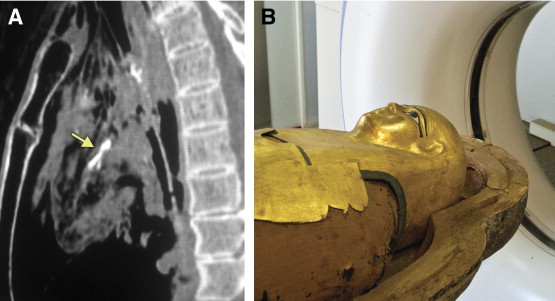 LONG BEACH, CALIFORNIA—After studying ancient Egyptian, Peruvian, Native American, and Mongolian mummies, medical researchers with a group known as the HORUS study team have found evidence for narrowing of ancient peoples' arteries due to high build up of fatty deposits, a condition known as atherosclerosis, which can contribute to a number of heart problems. In modern times, atherosclerosis can be caused by smoking, obesity, lack of activity, and other factors that were presumably not present in ancient cultures. Now the Horus study team is proposing that "non-traditional" causes of atherosclerosis could explain the prevalence of the condition among the mummies they have examined. In a World Heart Federation press release, the team points out that chronic infections caused by unhygienic conditions can produce prolonged inflammatory responses that lead to a build up in atherosclerotic plaque. Inhalation of smoke from fires might also cause atherosclerosis. The researchers found that the condition seems to be more common in female mummies, which could be explained by the fact that traditionally women spent more of their time near fires.