Scotland’s Dandaleith Stone May Be Unique 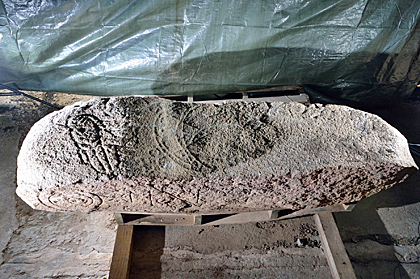 ABERDEENSHIRE, SCOTLAND—A large, pink granite boulder carved with symbols on adjacent faces was discovered last year by a farmer after it broke his plow. The stone was carved by the Picts, who lived in the region between the third and ninth centuries, with a large eagle, crescent and V-rod, notch rectangle and Z-rod. The Picts are thought to have created such stones between the sixth and eighth centuries as markers or commemorations. “The presence of two sets of symbols on a single stone is itself a very unusual feature relative to the corpus of symbol-bearing stones,” David V. Clarke, former Keeper of Archaeology at the National Museum of Scotland, told Culture 24. Archaeologists will investigate the field where the stone was found to try and determine if that was its original setting, or if it had been deposited there during a large-scale flood.