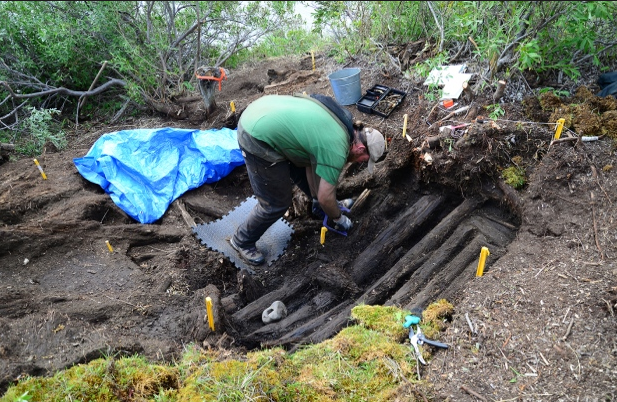 GALWAY, IRELAND—On Ireland's western coastline, archaeologists have unearthed an oaken structure that they suspect is a complete Bronze Age fulacht fiadh, or wooden cooking trough. The structure was was exposed by storms last winter and spotted by a local resident. "It is very significant, as it is unusual to find a fulacht fiadh at such a level of preservation, but the sea obviously conserved it when levels began to rise,” Ireland's Underwater Archaeology Unit's Finnbar Moore told the Irish Times. Radiocarbon dating of the structure puts its construction around 1700 B.C., when the area would have been covered in forests and lagoons. Archaeologists took the opportunity to survey around the fulacht fiadh before excavation. "It highlights the fact that there was several thousand years of human activity in this area before sea level rise, and this part of the coastline, and further, is akin to a time capsule—with enormous potential,” says Moore. To read more about fulachtaí fia, read ARCHAEOLOGY's "Letter From Ireland: Mystery of the Fulacht Fiadh."