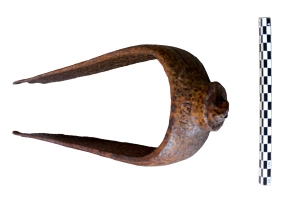 OTTAWA, CANADA—Two artifacts thought to have come from the lost ships of the Franklin Expedition have been discovered on Hat Island in Nunavut. The crews of the HMS Erebus and HMS Terror were searching for the Northwest Passage through the Arctic when they were lost in 1848. These artifacts are the first clues to the whereabouts of the lost ships to have been found since 1945, when human remains thought to be members of Sir John Franklin’s team were found buried on King William Island. The first artifact is a davit, an iron fitting from the crane of a Royal Navy ship; the second is a wooden plug to cover the hole for a ship’s anchor. “The iron fitting was lying on the shore, adjacent to a rock, a large rock, and the wooden artifact was a bit farther away, a bit farther from the shoreline,” Nunavut archaeologist Douglas Stenton told CBC News Canada. It’s not clear if the artifacts washed ashore from the sunken ships or if they were carried there by crew members, but they do tell researchers that they’ve been looking in the right place. To read about the discovery of HMS Investigator, the doomed vessel dispatched to search for HMS Erebus and HMS Terror, see ARCHAEOLOGY's feature "Saga of the Northwest Passage."