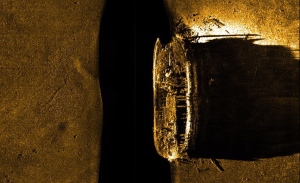 OTTAWA, CANADA—After six years of searching, one of the lost Franklin Expedition ships has been discovered in the waters of Victoria Strait near King William Island, right where an Inuit hunter testified in the late 1840s that he saw an abandoned ship sinking in deep water. “This is a great historic event,” Canada’s Prime Minister Stephen Harper announced at a press conference. Researchers from Parks Canada found the vessel using a recently acquired remotely operated underwater vehicle. “With older technology, you could have come very close to this and not seen it at all,” Harper stated in his comments, reported by CBC News. The sonar images reveal that some of the deck structures survived, but the masts were sheared away, probably by the ice when the ship sank. The contents of the ship “should be very, very well preserved,” added Parks Canada underwater archaeologist Ryan Harris. Further investigation should tell if the ship is the HMS Erebus or HMS Terror. “Finding the first vessel will no doubt provide the momentum—or wind in our sails—necessary to locate its sister ship and find out even more about what happened to the Franklin expedition’s crew,” Harper concluded. To read about the discovery of HMS Investigator, a doomed vessel dispatched to search for the HMS Erebus and HMS Terror, see ARCHAEOLOGY’s feature, “Saga of the Northwest Passage.”