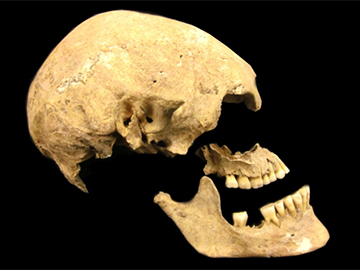 CAMBRIDGE, MASSACHUSETTS—A new genetic study by researchers from Harvard Medical School and the University of Tübingen suggests that early farmers from the Near East and indigenous hunter-gatherers were joined by a group known as Ancient North Eurasians as the ancestors of modern Europeans. The team analyzed the DNA of more than 2,300 modern people from around the world, and the DNA of eight ancient hunter-gatherers and one early farmer whose remains were recovered in Sweden, Luxembourg, and Germany. Previously gathered genetic sequences of humans from the same time period, including Otzi the Iceman, were also used in the study. “There was a sharp genetic transition between the hunter-gatherers and the farmers, reflecting a major movement of new people into Europe from the Near East,” David Reich of Harvard Medical School told Science Daily. The DNA of the two known Ancient North Eurasians, whose remains were discovered in Siberia, wasn’t found in either the hunter-gatherers or the early farmers, but nearly all Europeans have ancestors from all three groups. “The Ancient North Eurasian ancestry is proportionally the smallest component everywhere in Europe, never more than 20 percent, but we find in in nearly every European group we’ve studied and also in populations from the Caucasus and Near East,” he explained. (The same Ancient North Eurasian group has been linked to the ancestry of Native Americans.) An even older lineage called the Basal Eurasians, the ancestors of the ancient Near Eastern farmers, was discovered as well. “This deep lineage of non-African ancestry branched off before all the other non-Africans branched off from one another. Before Australian Aborigines and New Guineans and South Indians and Native Americans and other indigenous hunter-gatherers split, they split from Basal Eurasians,” Reich said. To read more on genetic lineages of Europeans, see ARCHAEOLOGY's "Seeds of Europe's Family Tree."