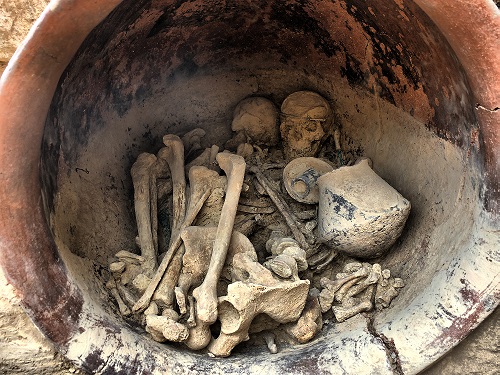 BARCELONA, SPAIN—Science Daily reports that an audience hall has been found in the Bronze Age palace at La Almoloya, located in southeastern Spain. Archaeologists Vicente Lull, Cristina Huete, Rafael Micó, and Roberto Risch of the Universitat Autònoma de Barcelona suggest that the hall is the oldest-known building constructed specifically for political use in continental Europe. It features a ceremonial fireplace and a podium, and benches lining its walls would have seated 64 people. Other buildings at the site are well-constructed with eight to twelve rooms in each residence. Some of the stucco-covered walls were decorated with geometric and naturalistic motifs in what has been dubbed the Argaric style. A tomb discovered near the political hall contained the remains of a man and a woman, whose skull was encircled with a silver diadem. She had also been buried with four ear dilators, two of silver and two of gold. Rings, earrings, and bracelets made of silver were among the grave goods. Other items include a bronze dagger held together with silver nails, and a small ceramic cup decorated with silver rims.  To read about Bronze Age shipwrecks, see ARCHAEOLOGY's "Cape Gelidonya and Uluburun."