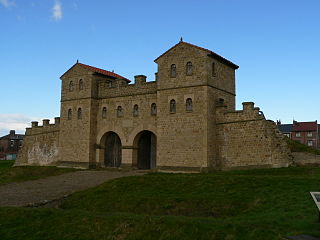 SOUTH SHIELDS, ENGLAND—The head of a small statue of the goddess Brigantia was uncovered by a WallQuest volunteer digging at Arbeia Roman fort, situated at the eastern end of Hadrian’s Wall. This area had been home to the Brigantes before the arrival of the Romans. “The Roman army was anxious to placate the goddess of what may have been seen as an inhospitable and hostile region, and these finds suggest that there may have been a shrine to Brigantia—the northern goddess—somewhere close to the present excavation site,” WallQuest project manager Nick Hodgson told Chronicle Live. The head was discovered in an aqueduct channel that was filled in when the fort was enlarged circa A.D. 208. “It looks as if the shrine got in the way of the extension to the fort and had to be demolished, and the statue was broken up then,” he added. To read about the complicated culture that grew up around Hadrian's Wall, see ARCHAEOLOGY's "Artifact: Romano-British Brooch."