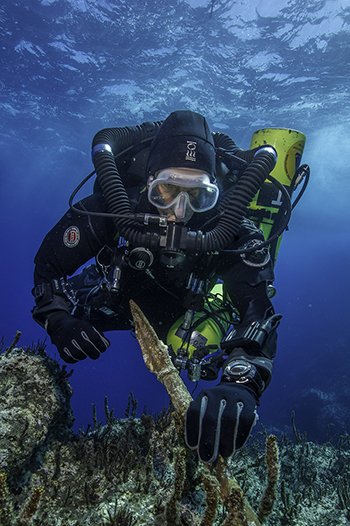 WOODS HOLE, MASSACHUSETTS—An international team of archaeologists and divers has learned that much of the Antikythera shipwreck and its cargo survive in the deep waters off the Greek island of Antikythera. They created a high-resolution, 3-D map of the site, and retrieved an intact jug, ship components, part of an ornate bed, and a very heavy bronze spear from a life-sized statue, perhaps of the goddess Athena. “The evidence shows us this is the largest ancient shipwreck ever discovered. It’s the Titanic of the ancient world,” Brendan Foley of the Woods Hole Oceanographic Institution told Science Daily. The luxury cargo, dating to 70 to 60 B.C., was probably traveling from the coast of Asia Minor west to Rome when the ship was lost. Sponge divers discovered the wreck in 1900, including bronze and marble statues, jewelry, furniture, glassware, and the device that came to be known as the Antikythera Mechanism. “We have a lot of work to do at this site to uncover its secrets,” said Theotokis Theodoulou of the Hellenic Ephorate of Underwater Antiquities. To read about more amazing shipwrecks, see ARCHAEOLOGY's "History's 10 Greatest Shipwrecks."