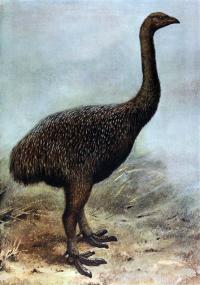 AUCKLAND, NEW ZEALAND—The extinction of the moa, New Zealand’s large, flightless bird, occurred shortly after the arrival of humans, according to a study of more than 600 radiocarbon dates conducted by a team including George Perry of the University of Auckland’s School of Environment and School of Biological Sciences. “This is the first time we have been able to show that extinction was both rapid and synchronous across New Zealand,” he told Stuff. Radiocarbon dates of moa eggshells at archaeological sites in the South Island show that people began hunting and eating moa after the eruption of Mt. Tarawera in about 1314 A.D. Radiocarbon dates of moa bones from non-archaeological sites show that they died out in the lowlands of the South Island by the end of the fourteenth century, and total extinction probably occurred by 1425. “Our results demonstrate how rapidly megafauna were exterminated from even large, topographically and ecologically diverse islands such as New Zealand, and highlight the fragility of such ecosystems in the face of human impacts,” Perry and his team wrote in Quaternary Science Reviews.