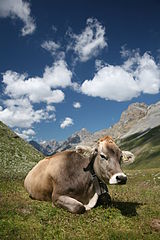 YORK, ENGLAND—An international team of researchers has analyzed ancient human dental calculus in order to look for direct evidence of milk consumption. They were able to identify a milk protein, beta-lactoglobulin, in the calcified plaque, which has also been found in modern plaque samples. And, variants in the milk protein indicate what animal produced the milk. “The study has far-reaching implications for understanding the relationship between human diet and evolution. Dairy products are a very recent, post-Neolithic dietary innovation, and most of the world’s population is unable to digest lactose, often developing the symptoms of lactose intolerance,” lead author Christina Warinner of the University of Oklahoma told Science Daily. Previous investigations have identified dairy products in residues on ancient ceramics. “While pot residues can tell you that people are using dairy products, it can’t tell you which individuals in the group are actually consuming the milk. This study is very exciting, because for the first time, we can link milk consumption to specific skeletons, and figure out who has access to this important nutritional resource,” added team member Camilla Speller of the University of York. To learn about the evolutionary advantages milk drinking offers, go to "Why Do Adults Drink Milk?"