The Secret Strength of Roman Concrete 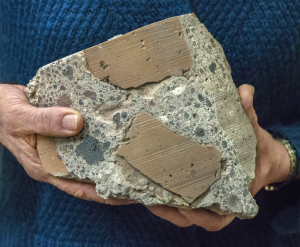 BERKELEY, CALIFORNIA—An international, interdisciplinary team of scientists has used beams of x-rays at the Advanced Light Source of the U.S. Department of Energy Lawrence Berkeley National Laboratory to study the longevity and endurance of Roman architectural concrete. A reproduction of the Roman volcanic ash-lime mortar that had been used to build the walls of Trajan’s Markets was observed over the 180-day curing process, and compared to 1,900-year-old samples of the original. The team discovered that a crystalline binding hydrate prevents microcracks from spreading, so that the concrete maintains its chemical resilience and structural integrity, even when earthquakes occur. In addition, mixing Roman cement releases less carbon into the environment than mixing modern Portland cement, which is made by heating a mix of limestone and clay to a higher temperature than that required to form the Roman version. “If we can find ways to incorporate a substantial volumetric component of volcanic rock in the production of specialty concretes, we could greatly reduce the carbon emissions associated with their production and also improve their durability and mechanical resistance over time,” explained Marie Jackson of the University of California, Berkeley. To read more about how Roman concrete was used, see "Rome's Lost Aqueduct."