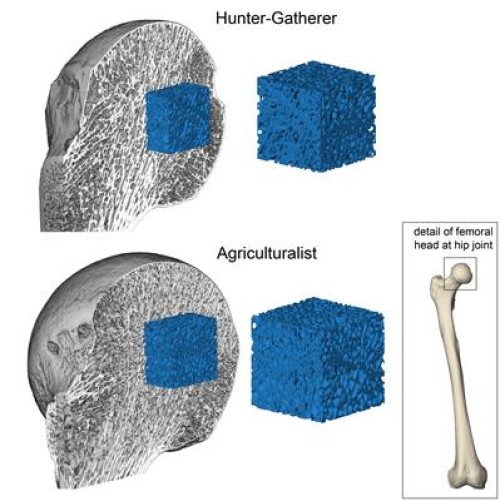 CAMBRIDGE, ENGLAND—Activity throughout life is the key to building strong bones, according to a new study conducted by researchers from the University of Cambridge. Colin Shaw of the Phenotypic Adaptability, Variation and Evolution (PAVE) Research Group and his colleagues x-rayed samples of the heads of human femur bones taken from four archaeological populations, all from the state of Illinois, including 7,000-year-old mobile hunter-gatherers, and 700-year-old sedentary agriculturalists. They found that the hunter-gatherers had more “spongy” bone, which can change shape and direction depending on the loads placed on it, and resist fracture. The thickening of the bone was caused by the constant physical activity required of hunter-gatherers. “We’ve shown that hunter-gatherers fall right in line with primates of a similar body size. Modern human skeletons are not systemically fragile; we are not constrained by our anatomy,” Shaw explained. Hominids that lived 150,000 years ago had even stronger skeletons than the hunter-gatherers. “Something is going on in the distant past to create bone strength that outguns anything in the last 10,000 years,” he said. To read about how hunter-gatherers fared in Sweden, see "Neolithic Farmers Assimilated Scandinavian Hunter-Gatherers."