The Origin & Evolution of Corn in the Southwest 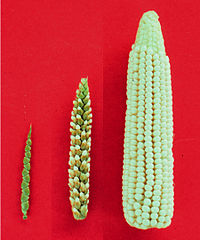 DAVIS, CALIFORNIA—An international team of scientists has compared samples of DNA extracted from ancient corn cobs unearthed in the American Southwest, including the multiple stratigraphic layers of New Mexico’s Tularosa Cave. “When considered together, the results suggest that the maize of the U.S. Southwest had a complex origin, first entering the U.S. via a highland route about 4,100 years ago and later via a lowland coastal route about 2,000 years ago,” said Jeffrey Ross-Ibarra of the University of California, Davis. The genes also show that maize adapted to the arid climate of the Southwest and to the preferences of the local people. “These unique data allowed us to follow the changes occurring in individual genes through time,” Rute Fonseca of the University of Copenhagen said of the samples taken from Tularosa Cave. To read more about how agriculture developed in the ancient Southwest, see "Early Irrigators."