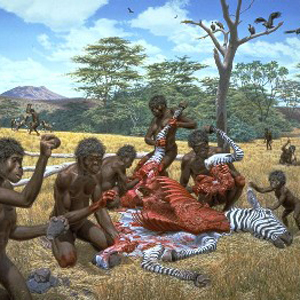 BERKELEY, CALIFORNIA—Thomas Morgan of the University of California, Berkeley, and Natalie Uomini of the University of Liverpool, along with colleagues from the University of St. Andrews, University College London, and McGill University, tested five different ways to teach Oldowan stone-knapping skills to more than 180 college students. Oldowan stone tools were used for butchering animals for 700,000 years, beginning some 2.5 million years ago. The researchers learned that when teaching college students, demonstrations enhanced with spoken instructions, over imitation, non-verbal presentations, or gestures, yielded the highest volume of quality flakes in the least amount of time with the least waste. “You learn so much faster when someone is telling you what to do,” Morgan explained. This would suggest that the makers of the oldest-known stone tools lacked the ability to talk. “These are the only tools they made for 700,000 years. So if people had language, they would have learned faster and developed newer technologies more rapidly,” he said. Then 1.7 million years ago, Acheulean hand axes and cleavers were developed. “To sustain Acheulean technology, there must have been some kind of teaching, maybe even a kind of language, going on, even just a simple proto-language using sounds or gestures for ‘yes’ or ‘no’ or ‘here’ or ‘there,’” Morgan said. “Our findings suggest that stone tools weren’t just a product of human evolution, but actually drove it as well, creating the evolutionary advantage necessary for the development of modern human communication and teaching.” To read about later tool-making, see "Neanderthal Tool Time."