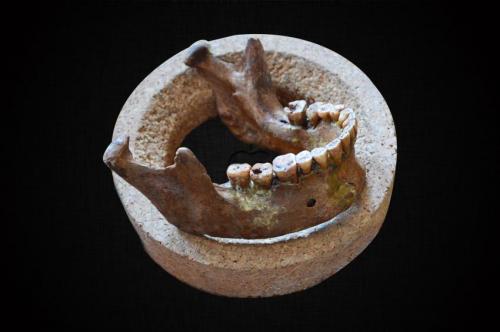 DUBLIN, IRELAND—An analysis of the lower jaws and teeth of 292 skeletons from the Levant, Anatolia, and Europe dating between 28,000 and 6,000 years ago has found differences in the form and structures of the jawbones of European hunter gatherers, Near Eastern/Anatolian semi-sedentary hunter-gatherers and transitional farmers, and European farmers. “Our analysis shows that the lower jaws of the world’s earliest farmers in the Levant are not simply smaller versions of those of the predecessor hunter-gatherers, but that the lower jaw underwent a complex series of shape changes commensurate with the transition to agriculture,” Ron Pinhasi of University College Dublin told Phys.org. Hunter-gatherer populations had an “almost perfect state of equilibrium” between their jawbones and dental distances, resulting in straight teeth. But the “harmony” between the jaws and teeth of the semi-sedentary hunter-gatherers and farmers was disrupted, perhaps by the shift in diet from wild, uncooked vegetables and meats to cooked cereals and legumes. Softer foods require less chewing, which in turn lessens the size of the jaw, but not the size of the teeth, resulting in dental crowding. To read about the evolution of the face, see "Your Face: Punching Bag or Spandrel?"