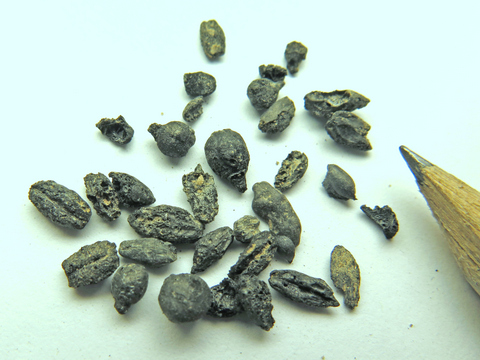 HAIFA, ISRAEL—The Israel Antiquities Authority has announced that charred grape seeds dating to the Byzantine era could help scientists learn about “the Wine of the Negev,” noted in historical sources as one of the finest wines in the Byzantine Empire. “The vines growing in the Negev today are European varieties, whereas the Negev vine was lost to the world. Our next job is to recreate the ancient wine, and perhaps in that way we will be able to reproduce its taste and understand what made the Negev wine so fine,” said excavation director Guy Bar-Oz of the University of Haifa. Previous excavations in the Negev have uncovered the terraces where the vines were cultivated, the wineries where the drink was produced, and the Gaza jugs in which it was stored, but this is the first time that the grape seeds, recovered from the middens surrounding the ancient city of Halutza, have been found. Pottery and coins in the middens suggest that the seeds date to the sixth and seventh centuries A.D., when the city was at the peak of its economic success. “After washing the dirt and gently sifting the findings all that remained was to separate the botanical findings, which included seeds, pits and plant remains, from small animal bones, which included the remains of rodents that were drawn to the refuse,” Bar-Oz said. Study of the seeds could reveal if the vines were native to the Negev, or if they had been imported. For more, see "Ancient Wine Press Discovered in Tel Aviv."