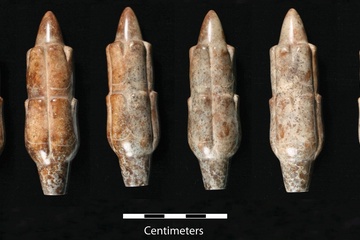 FULLERTON, CALIFORNIA—An unusually shaped artifact carved from jadeite has been found underwater at the site of Arroyo Pesquero, in Veracruz, Mexico. “The iconography is pretty difficult to interpret; it’s definitely not clear,” Carl Wendt of California State University, Fullerton, told Live Science. The artifact, which dates to the time of the Olmec, “seems to be an abstract representation, I believe, of a cob of corn,” he said. The sculpture may have been attached as a finial to a staff as a symbol of power and authority before it was placed in the stream, where freshwater and saltwater intersect, as an offering, sometime between 900 and 400 B.C. “While having practical importance today as a spot to collect fresh water, in Olmec times, the confluence would also have been important for symbolic and cosmological reasons, and an ideal place for a ritual hoard or votive offerings,” Wendt and his team wrote in the journal Ancient Mesoamerica. So far, no buildings dating to between 900 and 400 B.C. have been found at Arroyo Pesquero. “Freshwater, so critical to daily life, was relatively scarce in a region of stagnant swamps. It is no wonder that springs and other freshwater sources were sacred places, and sacrificing [objects] at them was an important part of Olmec ritual,” they continued. To read about evidence for Olmec writing, see "The Cascajal Block."