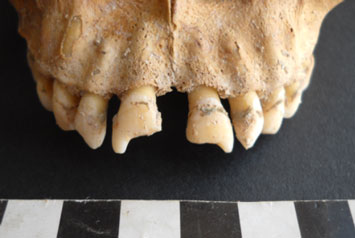 COPENHAGEN, DENMARK—Scientists from the University of Copenhagen and Stanford University School of Medicine have extracted DNA from the poorly preserved tooth roots of three enslaved Africans who had been buried on the Caribbean island of Saint Martin more than 300 years ago. The technique, called whole-genome capture, revealed that one skeleton belonged to a man who had likely belonged to a Bantu-speaking group in northern Cameroon. The samples from the other two individuals shared similarities with non-Bantu-speaking groups in present-day Nigeria and Ghana. “This project has taught us that we cannot only get ancient DNA from tropical samples, but that we can reliably identify their ancestry,” said Carlos Bustamante of Stanford University. Teeth from all three of the skulls had been filed down in patterns characteristics of certain African groups, but that was not enough information to pinpoint where the individuals had lived when they were unearthed in 2010 during a construction project. And historic records from the slave trade usually refer to shipping points, not information about the origins of the captured. “There are still certain limitations—which are essentially to do with the comprehensiveness of our modern reference panels—but I don’t see why we shouldn’t be able to identify specific source populations or ethnic groups in the future,” added team leader Hannes Schroeder of the University of Copenhagen. To read about the extraordinary excavation of slave quarters on an island in the Indian Ocean, see "Castaways."