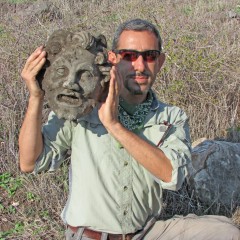 HAIFA, ISRAEL—A large, heavy bronze mask depicting the god Pan—the half-man, half-goat god of shepherds, music, and pleasure—has been unearthed at Hippos-Sussita National Park. “Most of the known bronze masks from the Hellenistic and Roman periods are miniature,” archaeologist Michael Eisenberg of the University of Haifa said in a press release. The mask was uncovered near the remains of a basalt structure with thick walls that dates to the Roman period. Further excavation could determine if the building was a defensive structure that was converted into a place of worship. Eisenberg expects that the team will find a Pan altar on the main road leading to the city because Pan was often worshiped in caves and in nature, in addition to urban temples. “Because they included drinking, sacrificing and ecstatic worship that sometimes included nudity and sex, rituals for rustic gods were often held outside of the city,” he explained. To read about other artifacts from this era and region see "Roman Coins in Israel."