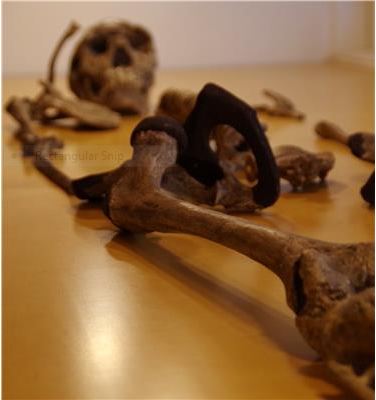 CAMBRIDGE, ENGLAND—Fragmentary fossils, including tiny toes and ankle bones, have been used to estimate the height and body mass of early human ancestors living during the Pleistocene. The study, conducted by researchers from the University of Cambridge and the University of Tübingen who developed the new techniques, reveals that that early humans displayed a wide variety body sizes. “What we’re seeing is perhaps the beginning of a unique characteristic of our own species—the origins of diversity. It’s possible to interpret our findings as showing that there were either multiple species of early human, such as Homo habilis, Homo ergaster, and Homo rudolfensis, or one highly diverse species. This fits well with recent cranial evidence for tremendous diversity among early members of the genus Homo,” Jay Stock of the University of Cambridge said in a press release. For example, groups living in South African caves averaged 4.8 feet tall, while some individuals from Kenya’s Koobi Fora region were almost six feet tall. “Basically every textbook on human evolution gives the perspective that one lineage of humans evolved larger bodies before spreading beyond Africa. But the evidence for this story about our origins and the dispersal out of Africa just no longer really fits. The first clues came from the site of Dmanisi in Georgia where fossils of really small-bodied people date to 1.77 million years ago. This has been known for several years, but we now know that consistently large body size evolved in Eastern Africa after 1.7 million years ago, in the Koobi Fora region of Kenya,” he explained. For more on the evolution of early humans, see "Our Tangled Ancestery."