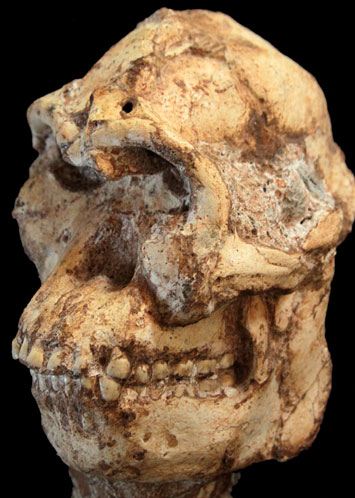 WEST LAFAYETTE, INDIANA—Little Foot, an Australopithecus prometheus skeleton discovered by Ronald Clarke of the University of the Witwatersrand in central South Africa, has been dated at 3.67 million years old with a new technique pioneered by Darryl Granger and Ryan Gibbon of Purdue University. Australopithecus prometheus is very different from its contemporary Australopithecus afarenis, and is more similar to the Paranthropus lineage. “It demonstrates that the later hominids, for example Australopithecus africanus and Paranthropus did not all have to have derived from Australopithecus afarensis,” Clarke said in a press release. “We have only a small number of sites and we tend to base our evolutionary scenarios on the few fossils we have from those sites. This new date is a reminder that there could well have been many species of Australopithecus extending over a much wider area of Africa.” The Little Foot fossils were dated with isochron burial dating, which measures the radioactive isotopes aluminum-26 and beryllium-10 that are created when quartz within rock is exposed to cosmic rays. When the rock is buried or deposited in a cave, the isotopes decay at very slow, known rates, allowing scientists to determine how long the rock has been underground, Granger explained. “If we had only one sample and that rock happened to have been buried, then re-exposed and buried again, the date would be off because the amount of radioisotopes would have increased during its second exposure. With this method we can tell if that has happened or if the sample has remained undisturbed since burial with the fossil. It is expensive and a lot of work to take and run multiple samples, but I think this is the future of burial dating because of the confidence one can have in the results,” he said. To read more about Australopithecus species, see "The Human Mosaic."