Stone Bracelet May Have Been Made by Denisovans 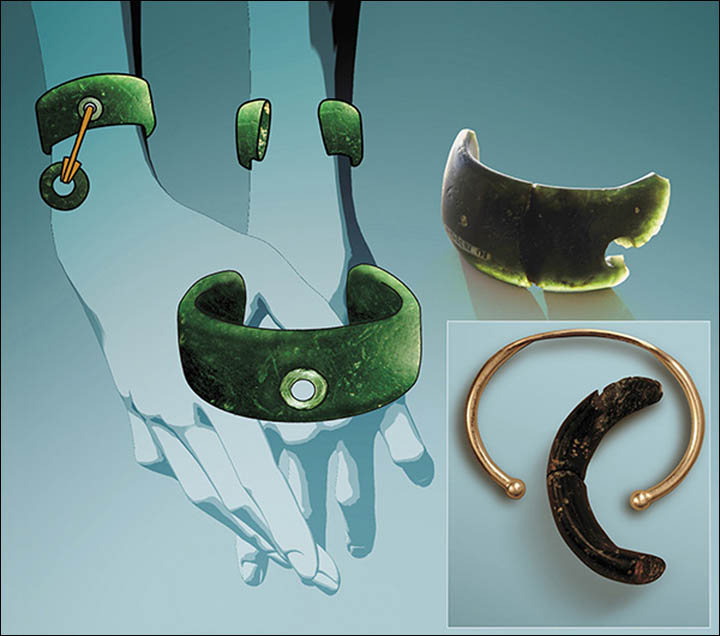 NOVOSIBIRSK, SIBERIA—A stone bracelet unearthed in Denisova Cave in the Altai Mountains of Siberia in 2008 is being called the oldest-known jewelry of its kind. Anatoly Derevyanko, director of the Russian Academy of Sciences’ Institute of Archaeology and Ethnography, and the research team believe that the cave’s Denisovan layers were uncontaminated by human activity from a later period. The soil around the two fragments of the jewelry piece was dated with oxygen isotopic analysis to 40,000 years ago. “In the same layer, where we found a Denisovan bone, were found interesting things; until then it was believed these were the hallmark of the emergence of Homo sapiens. First of all, there were symbolic items, such as jewelry, including the stone bracelet as well as a ring, carved out of marble,” Derevyanko told The Siberian Times. Details of the ring have not been released, but the bracelet, fashioned from imported chlorite, is fragile and thought to have been worn only on special occasions by an elite woman or child. “The ancient master was skilled in techniques previously considered not characteristic for the Palaeolithic era, such as easel speed drilling, boring tool type rasp, grinding and polishing with a leather and skins of varying degrees of tanning,” Derevyanko said. Wear near a hole drilled on the outer surface of the bracelet suggests that it may have held a leather strap attached to a heavy charm. This wear also suggests that the bracelet was worn on the right wrist. “The bracelet is stunning—in bright sunlight it reflects the sun’s rays, at night by the fire it casts a deep shade of green,” he said. To read more about our recently discovered relatives, see "Denisovan DNA."