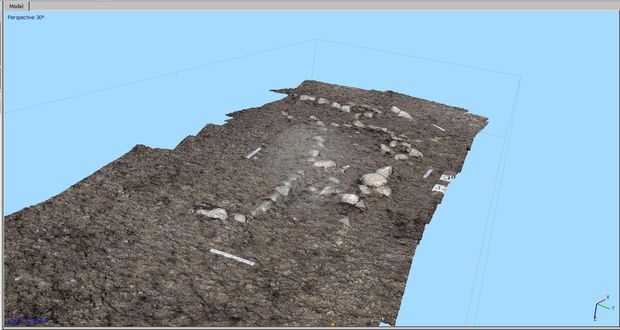 HI-LINE DISTRICT, MONTANA—An unmanned aircraft system (UAS) was used by Bureau of Land Management rangers to photograph the Henry Smith archaeological site in Montana’s Hi-Line District, following a controlled burn of some 320 acres of land in the area. “This was the first use of a (UAS) by the BLM to obtain imagery and data in relation to cultural resources in the Northern Plains,” Josh Chase, Hi-Line District archaeologist, said in a statement reported in The Billings Gazette. The removal of vegetation from the site allowed scientists to get a clear view of Avonlea-period complex (A.D. 770-1040), which includes anthropomorphic and zoomorphic stone effigies, stone cairns, drive lines, and stone circles. Avonlea-period hunters may have used the structures in rituals related to bison hunting and butchering. “The project will allow BLM to better study, document and manage this unique location,” Chase said. Temperature sensors were placed in mock cultural sites to measure the maximum temperature of the grass-fueled fire, and to study its effects bone and stone remains. This will help scientists understand how fire interacts with cultural resources. To read in-depth about prehistoric bison hunting in Montana, see "The Buffalo Chasers."