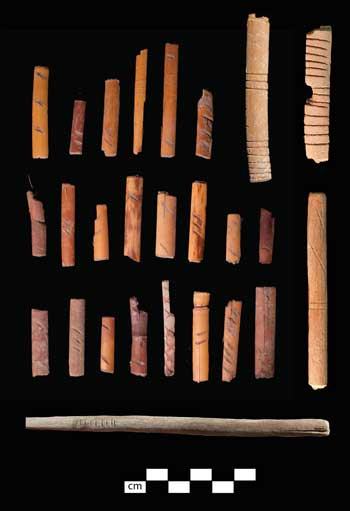 EDMONTON, CANADA—A cave on the shore of Utah’s Great Salt Lake has yielded butchered bison and elk bones and hundreds of child-sized moccasins made by the members of the Promontory culture in the late thirteenth century. Now archaeologist John Ives of the University of Alberta is studying dice, hoops, and carved pieces of cane from the cave that are thought to have been used for gambling. “The numbers and diversity of gaming artifacts that we see in the Promontory record are unparalleled in western North America,” Ives told Western Digs. Many of the gaming pieces were discovered around a central hearth near the entrance to the cave, in what was probably a social, domestic space. “The propensity of the Promontory people for gaming signifies a genuine interest in engaging in peaceful interactions with neighbors extending over the far-flung area in which they ranged,” added University of Alberta’s Gabriel Yanicki, who has studied historical accounts of games played with similar objects. To read about a famous collection of figurines found in Utah, go to "Investigating a Decades-Old Disappearance."