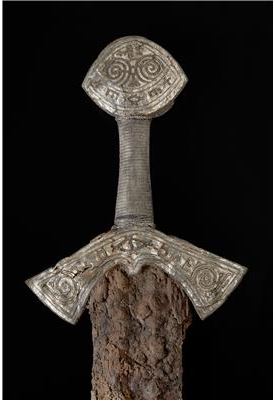 OSLO, NORWAY—A sword from the late Viking Age has been discovered in a burial in Langeid, a village in southern Norway. “Although the iron blade has rusted, the handle is well preserved. It is wrapped with silver thread and the hilt and pommel at the top are covered in silver with details in gold, edged with a copper alloy thread,” project leader Zanette Glørstad said in a press release. Post holes in the four corners of the large grave once held a roof, and yielded charcoal dated to the year A.D. 1030, which coincides with coins found at the bottom of the grave. One of the coins, from England, was minted during the reign of Ethelred II, between 978 and 1016. A battle ax with a shaft coated with brass was also discovered in the same grave. Similar axes have been found in the River Thames in London, suggesting that the weapons in this burial might be linked to Viking battles along the Thames in the late tenth and early eleventh centuries. “It’s quite possible that the dead man was one of King Canute’s hand-picked men for the battles with King Ethelred of England,” Glørstad added. To read more about the Viking era in England, go to "Vengeance on the Vikings."