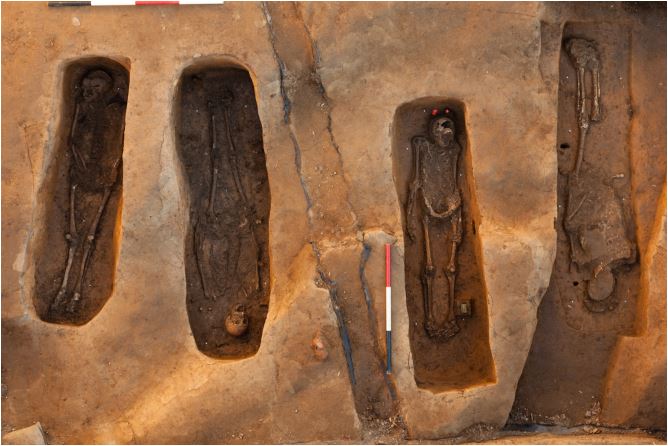 WASHINGTON, D.C.—Archaeologists from Jamestown Rediscovery and Smithsonian forensic anthropologist Douglas Owsley and his team have identified the remains of four men buried in the chancel of the 1608 church at Jamestown as the Rev. Robert Hunt, Capt. Gabriel Archer, Sir Ferdinando Wainman, and Capt. William West with archaeological evidence, skeletal analyses, chemical testing, 3-D technology, and genealogical research. “Two of the men, Archer and Hunt, were with the first expedition, which established Jamestown in May 1607. And the other two, Wainman and West, arrived with Lord De La Warr and helped save the colony three years later,” James Horn, president of Jamestown Rediscovery, said in a press release. Hunt, an Anglican minister, is thought to have been buried simply, in the grave without a coffin. Archer died during the “starving time” at Jamestown and is thought to have been buried in a coffin with a captain’s leading staff. This burial also contained a small silver box that may have served as a Roman Catholic reliquary. Lead in the bones of the third burial suggests the deceased was affluent and had eaten from pewter and glazed wares. This man, thought to be Wainman, had been buried in an anthropomorphic wooden coffin. The last of the chancel burials is thought to belong to Capt. William West, who was killed in 1610 during a skirmish with the Powhatan. He was also buried in an anthropomorphic coffin. A micro-CT scan revealed the highly decayed remnants of a military sash, thought to have been made of silk and adorned with silver fringe and spangles. “The presence of the artifacts and the location of the graves in the church’s most sacred space, the chancel, both indicate the high status of the four men and their importance to the early history of the Jamestown venture,” said William Kelso, director of archaeology at Jamestown Rediscovery. To read about a discovery at Jamestown that made our Top 10 list, go to "1608 Church-Jamestown, Virginia."