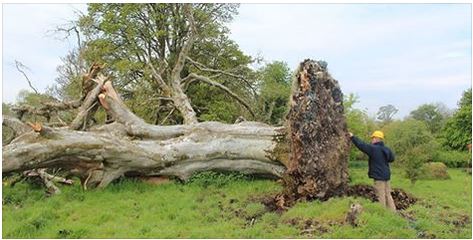 COLLOONEY, IRELAND—Heavy rains and winds in County Sligo toppled a beech tree and exposed the Christian burial of a teenage boy who lived during the early medieval period, sometime between A.D. 1030 and 1200. “The upper part of the skeleton was raised into the air trapped within the root system. The lower leg bones, however, remained intact in the ground. Effectively as the tree collapsed, it snapped the skeleton in two,” archaeologist Marion Dowd of Sligo-Leitrim Archaeological Services said in a statement reported in Discovery News. The teen once stood more than 5’ 10” tall, making him taller than average for the time. He had mild spinal joint disease, probably from a life of physical labor. The skeleton also showed evidence of two stab wounds. “Whether he died in battle or was killed during a personal dispute, we will never know for sure,” Dowd said. No other skeletons have been found in the area. To read about a medieval mass grave found in England, go to "Vengance on the Vikings."