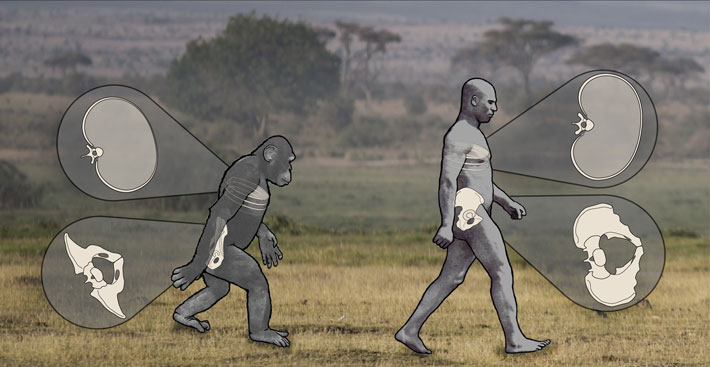 STONY BROOK, NEW YORK—Modern humans and chimpanzees use their upper bodies in similar ways while walking, according to a study led by researchers from Stony Brook University. It had been thought that while walking on two legs, the chimpanzee torso—the area of the ribcage, belly, and pelvis—remained rigid. Humans, on the other hand, have flexible torsos that can rotate in the opposite direction of the lower body while walking. Using high-speed cameras, the team recorded chimps and humans walking and studied those movements with 3-D kinematic analyses and computer-generated comparisons. “During walking, we actually observed as much rotation within the torsos of chimpanzees as in humans. This means that the widely accepted assumptions in the scientific community about how the chimpanzee torso works based on the skeleton alone are incorrect. Our results also point to the notion that a limitation to upright walking that we thought affected Lucy and other early human ancestors probably was not a limitation at all,” Nathan Thompson said in a press release. So Lucy, or Australopithecus afarensis, may have had a torso that functioned much like that of a modern human. To read about the evolution of the throwing motion, go to "No Changeups on the Savannah."