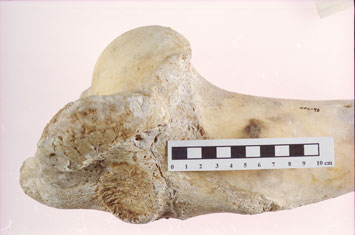 DUBLIN, IRELAND—David MacHugh of University College Dublin and a team of scientists extracted nuclear DNA from the 6,750-year-old bone of a wild aurochs discovered in a cave in Derbyshire, England. They then compared the genome to the genomes of domesticated B. taurus and B. indicus cattle, two major groups of cattle known to have descended from the aurochs, and DNA marker information from more than 1,200 modern cows. “Our results show the ancestors of modern British and Irish breeds share more genetic similarities with this ancient specimen than other European cattle. This suggests that early British farmers may have restocked their domesticated herds with wild aurochs,” MacHugh told Phys.org. The genes also showed early farmers selected for behavioral and meat traits. To read in-depth about the Neolithic in Britain, go to "Neolithic Europe's Remote Heart."