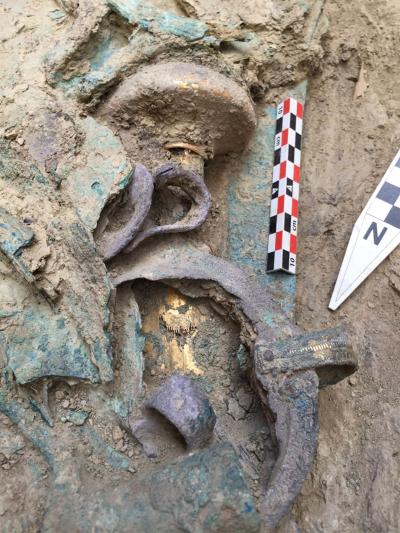 CINCINNATI, OHIO—The tomb of a wealthy warrior who had been buried with more than 1,400 artifacts, including jewels and beads made from precious stones, ivory objects, weapons, armor, and vessels made from precious metals has been discovered in southwestern Greece by a team of archaeologists led by researchers from the University of Cincinnati. Many of the objects are in the Minoan style and may have been brought from Crete. The tomb dates to 1500 B.C. and was originally thought to be the corner of a house located in the area of the Palace of Nestor, but the excavators soon realized that they had found an undisturbed grave shaft. “This latest find is not the grave of the legendary King Nestor, who headed a contingent of Greek forces at Troy in Homer’s Iliad. Nor is it the grave of his father, Neleus. This find may be even more important because the warrior predates the time of Nestor and Neleus by, perhaps, 200 or 300 years. That means he was likely an important figure at a time when this part of Greece was being indelibly shaped by close contact with Crete, Europe’s first advanced civilization,” team co-leader Sharon Stocker said in the University of Cincinnati Magazine. To read more about the period, go to "The Minoans of Crete."