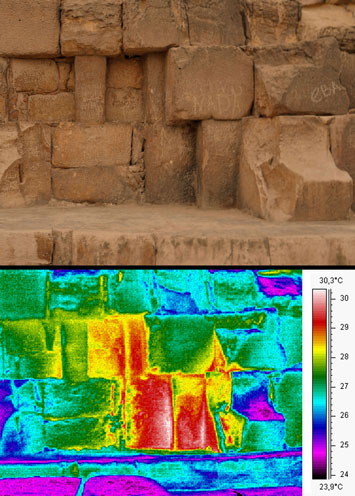 CAIRO, EGYPT—Thermal scans of Khufu’s Great Pyramid were made at sunrise, as the sun heats the structure, and at sunset, when they pyramid cools, as part of Egypt’s Scan Pyramids Mission. Scientists from Cairo University, Paris’ Heritage Innovation and Preservation Institute (HIP), Quebec’s Université Laval, and Japan’s Nagoya University measured the rate of heating and cooling and found the first row of limestone blocks on the pyramid’s eastern side are the same temperature, except for three, which are hotter. This difference in temperature could be explained by fractures in the rock behind the blocks, or perhaps by empty spaces. “It could be void spaces, fissures, or passages. So far, I do not know,” explained Egypt’s Minister of Antiquities Mamdouh Eldamaty in Ahram Online. Further tests, including muon radiography, and 3-D reconstruction, are underway. To read more about pyramids, go to "Miniature Pyramids of Sudan."