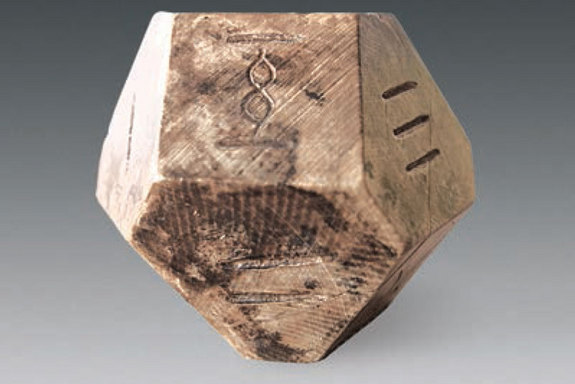 QINGZHOU CITY, CHINA—Live Science reports that a heavily looted tomb located near the coast of the Gulf of Tonkin in southern China has yielded pieces from a board game, including a 14-face die made of animal tooth, 21 game pieces with numbers painted on them, and a broken tile that was part of the game board. The pieces are thought to belong to a game called “bo,” also known as “liubo.” Researchers are not sure how the game was played, in part because it has not been played for some 1,500 years. Five pits for grave goods had been placed beside the 2,300-year-old tomb, which dates to the Warring States Period and is thought to belong to aristocrats from the state of Qi. Looters had dug 26 shafts into the tomb’s burial mound. “The coffin chamber was almost completely dug out and robbed, suffering severe damage in the process,” the archaeologists wrote in the journal Chinese Cultural Relics. To read in-depth about Chinese archaeology, go to "The Tomb Raider Chronicles."